Sunday is Palm Sunday and starts Holy Week. It’s a good time to pull out your Easter movies.

10. Demetrius and the Gladiators

1961 Director: Nicholas Ray Starring Jeffrey Hunter If you can get past Jeffrey Hunter’s blue eyes and blond hair, it’s a good movie.

2003 Director Phillip Saville Starring Christopher Plummer and Henry Ian Cusick It follows the words in the Bible. Good, but not as good as Matthew.

1953 Director: Henry Koster Starring Richard Burton and Jean Simmons This movie takes some liberties with the story, but it’s a great movie to watch and doesn’t change the essence. It’s also a touching love story. The line I remember most was when Richard Burton with his wide eyes glaring said. “Were you there?” It gave me the creeps.

3. The Visual Bible: The Gospel of Matthew

2004 Director: Mel Gibson Starring James Caviezel When I watch this movie, I feel like I’m watching the real event. It chokes me up every time.

Cary Grant is one of my favorite actors of all times. Here’s my top 10 Cary Grant Movies.

This is an early Cary Grant movie that many don’t know about. It’s a touching story. But be warned. You’ll need plenty of tissues. It’s a real tear jerker.

Not my favorite Alfred Hitchcock movie, but still well worth seeing.

You can’t go wrong when you put Alfred Hitchcock, Grace Kelly, and Cary Grant together.

7. That Touch of Mink

This classic Doris Day movie is even better because Cary Grant is in it.

Sparks fly when a man pretends to be married so his girlfriend won’t expect him to marry her.

The funniest Cary Grant movie ever made.

Grant plays a professor who often does the unexpected especially when he marries a college student who is pregnant by her boyfriend who died in combat. This movie is funny and touching but also shows the hypocrisy in some societal conventions.

Another Alfred Hitchcock thriller that will keep you on the edge of your seat.

This is Cary Grant’s first Alfred Hitchcock movie, and it kept me on the edge of my seat the entire movie.

1. An Affair To Remember

This is the best movie Cary Grant ever made. The way Cary Grant and Deborah Kerr played off each other was brilliant. There were two other versions of this story made with other actors, but they aren’t even in the ballpark with this one. It’s one of my top three romance movies as well.

Today I’m listing my top 10 Classic Movie Musicals in order. This is a hard one. I love every one of these, and there’s some of my favorites that didn’t make the list. But since I limited myself to ten, here they are.

Music by Richard and Robert Sherman

The second best children’s movie ever

Music by George and Ira Gershwin

Favorite Song: They Can’t Take That Away From Me

This is the best Fred Astaire movie of them all, and it doesn’t hurt that Ginger Rogers is in it too. Besides the fabulous dancing and great music, it’s a very funny movie.

Music by Loewe and Lerner

Favorite Song: I Could Have Danced All Night

A musical based on Pygmalion.

Favorite Song: Tie between Some Enchanted Evening and I’m In Love With a Wonderful Guy

This movie confronted prejudice when it wasn’t politically correct to do so. When it came out, it was banned in many movie theaters in the South.

Music by Arlan and Harburg

Favorite Song: Over the Rainbow

Greatest children’s movie ever made.

Favorite Song: Shall We Dance

Deserves to be a classic.

Favorite Song: I Remember It Well

Favorite Song: Tie between 76 Trumbones and Til There Was You

Music by Bernstein and Sondheim

Favorite Song: Tie between Somewhere, Tonight, and I Feel Pretty

Romeo and Juliet love story set in the gangs of New York City.

1. The Sound of Music

Favorite Song: The Sound of Music

So what’s your favorite movie musical? 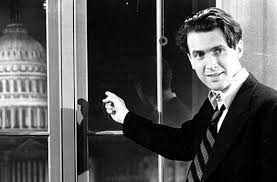 This is my favorite Jimmy Stewart movie where Stewart plays a David who goes up against the Goliath of corrupt politics in Washington D.C.

This isn’t just a Christmas favorite. In this movie, Stewart shows that we have a great influence on others without knowing it.

This is my favorite Alfred Hitchcock movie and the first Hitchcock movie that stars Jimmy Stewart. It is a chilling reminder of the philosophy that allowed Hitler to rise to power.

The Man Who Knew Too Much

This is my next to favorite Alfred Hitchcock movie. Stewart has the choice of saving his son by allowing another man to die or saving the man and risking his son’s life. Every time I watch this movie, I still am on the edge of my seat.

Another Alfred Hitchcock favorite that explores the question of what would you do if you witnessed a murder outside your window and nobody believed you.

I love this movie about a giant invisible rabbit.

The Man Who Shot Liberty Valence

I love Alfred Hitchcock movies, and when Alfred Hitchcock and Jimmy Stewart get together, it’s always good. This isn’t my favorite because, at times, the pace is too slow, but it’s a good one.

A great western. When Charlie Anderson tries to keep his family out of the Civil War, it comes to him.

Take Her, She’s Mine

Jimmy Stewart is hilarious as a father raising a teenage daughter who is in over his head.

This is one of my favorite movies of all time. Jimmy Stewart is the underdog fighting corruption in Washington D.C.

What’s not to love about this film? Will Smith and Jeff Goldblum have the funniest lines, and Bill Pullman is the president who fights for not just the US but for the world. In this movies, the United States saves the day.

The president of the United States will not negotiate with terrorists, and in this movie, he takes them down.

Great musical comedy about the founding fathers of America. William Daniels plays John Adams who is so passionate about independence, he ends up being a jerk.

5. State of the Union

Another movie taking on corruption in Washington D.C. What’s not to love about Spencer Tracy and Katherine Hepburn?

This is the true story of the Apollo 13 space mission where 3 astronauts almost didn’t make it home. This shows the true heroism and enterprise of Americans.

A wonderful movie laced with historical trivia that makes the point that sometimes you have to do what others consider wrong to do what’s right.

8. National Treasure: The Book of Secret

This sequel is as good as the original.

This movie gives us a taste of what people endured to fight for the independence of the United States of America.

This is a true story about the reluctant hero of World War 1 and the part his faith played in his heroism.

Here’s my top 10 favorite classic movies starring one of my favorite actors, Humphrey Bogart. Some of the results may surprise you.

My all time favorite Humphrey Bogart movie and the first movie he made with his future wife. You can see the sparks between them jump off the screen especially when she tells him how to whistle.

This is most people’s favorite Humphrey Bogart movie, and it’s my second favorite, but nothing beats the chemistry between Bogart and Bacall. Still this is one of my all time favorites and one of the most quoted movies of all time.

John Huston direction and starring Humphrey Bogart and Katherine Hepburn? How can it not be good?

Another great John Huston movie with Humphrey Bogart and Lauren Bacall. This is the last movie Bogart and Bacall made together.

A great romantic story about a girl who believes she loves one man when she really loves another.

A movie based on the novel by William Barrett. This movie isn’t that well known, but it’s one of my favorites about a priest who finds redemption in China.

This is the original Sam Spade private eye movie that all the others copy. The beginning of a movie genre and a great flick.

A man is convicted of the murder of his wife. He didn’t do it and on the way to prison to be executed, he escapes. This is the original Fugitive movie, only Bogart is lucky enough to have Lauren Bacall help him solve the mystery of who killed his wife.

This movie was made during World War 2. Rick Leland is court martialed and hints that he’s for hire to the highest bidder.

This movie is when Humphrey Bogart became a star and started the genre of the bad guy as the sympathetic main character.

A group of people are trapped in an elevator and the Devil is mysteriously amongst them.

THE DEVIL, a M. Knight Shyamalon movie, is a sleeper that didn’t get that many great reviews at the box office. You might remember Shyamalon movies of the past like SIGNS, SIXTH SENSE, and THE VILLAGE. The movies he’s made over the last six years have not done well. This movie doesn’t have any big stars in it. The actors are all unknown.

So considering all that, why would I rate this horror flick so high? It’s because this movie surprised me. It had a Christian worldview of the devil that was more accurate than some of the Christian movies I’ve watched. There is so much to like about this movie.

First, the symbolism is great. A suicide gives enterance to the devil to come and torment a group of people bound for Hell before he kills them. The suicide victim falls on a “Bethel Bakery” truck. The building is located at 333 Locust. Then there’s the cop whose family was killed by a hit and run driver on Bethlehem Road. I’m sure I missed some of the symbolism. There’s a lot of it there. But I plan to watch it again, and I’ll keep my eyes open to it.

Next, there’s a lot of doctrinal truth in this movie. The movie begins with the Bible verse 1 Peter 5:8. The last line in the movie is brilliant. “If the devil exists, than so does God.” I also love that the way the devil gains access to a person is because that person decieves himself about how bad his sin really is. There’s no man is basically good garbage in this movie. While I don’t want to give it away, there is also a thread of redemption running through this movie.

I also loved that the movie was able to surprise me. It shouldn’t have. When it happened, I had a moment of “Of course”. But I got so involved in the movie, I didn’t see it coming. That doesn’t happen often, but M. Knight movies seem to be able to do that to me.

This movie is great for adults who don’t mind some violence and a little language (a couple of S words), but I wouldn’t recommend it for children or young teens.