Father’s Day will be here in a little over a week, so I thought I’d share why I think my husband is a great dad to our children and how young fathers can emulate his example.

My husband was a great dad to our children. We have grown son and daughter, both married, who don’t live with us. Although they’ve struggled at times, my children have grown up to become responsible adults who love the Lord.

My son is married and has two sons of his own. He is also a terrific husband and father. He supports his family working as a real estate agent and ministers at his church.

My daughter is married. She will be finishing her Master’s Degree in clinical mental health counseling in December. She currently is an intern at Emerge Christian Counseling Center. She and her godly husband are very involved in their church.

Much of the reason my children are who they are is because of their dad. Here’s some of the things he’s done while they were growing up.

He spent time with them. My son and his dad would go to airplane shows, for walks in the park, and to look at race cars together. These were interests my son had, and my husband would take the time to encourage those interests. My daughter and her father would go on dates together. He would do what she wanted to do. That usually meant going out to eat, then going to a romantic movie or shopping. My husband doesn’t like chick flics or shopping, but he loved doing these things with his daughter.

He taught them things. My son knows basic carpentry, home maintenance, and how to do minor car repairs because his father taught him whenever he was doing something around the house. It would have been easier for my husband to fix a car or patch a wall without explaining every step to my son and allowing him to do some of it, but he understood that a good father teaches his children. He also taught my daughter many things like how to change a tire and how a man should treat her on a date.

He was a godly example. My husband didn’t get saved until we had been married sixteen years. But even before that, he was a man of integrity. He was always where he said he would be, and I never had to worry about him being unfaithful. After he was saved, he stepped it up a notch by being a godly example in everything he did. He didn’t act one way at church and another way at home. Our children saw what it means to be a Christian by watching my husband.

He’s a wonderful husband. My husband loves me and shows me respect. He listens to me and supports me. And he’s faithful to me. This is one of the best things a dad can do for his children. He showed my son how to be a good husband, and he showed my daughter what a good husband looks like.

He was a strict disciplinarian. My husband showed his children love, but he also expected certain types of behavior from them. When they failed to meet the mark, there would be consequences. This also showed his love for them because it taught them that morality is the best way and that there are consequences in life.

My husband’s favorite saying during those times was “Life’s not fair.” And it’s true. Life is not fair. Dads help their children most when they teach them this principle. Children need to learn to deal with the unfairness of life without becoming bitter or pessimistic. My husband taught my children that life’s not fair, but that doesn’t give them the excuse to be unfair or unkind or to rebel against authority.

I’d enjoy hearing comments about why your husband or father is a good dad.

My grandsons have declared war with my husband, Rick

My husband was a is a good father. Because of his example, my son is a good father who is raising his two sons to be godly men. Every boy or man should hear these 10 things from his father by the time he becomes an adult.

My son Jonathan with his 2 sons

1. Treat your mother with respect. She’s my wife.

4. Be a man. Do the hard thing because it’s right.

6. Treat every woman as if she’s a lady.

7. Be a gentleman. It will never be politically incorrect no matter what they say.

My son playing with his sons at Myrtle Beach

8. I love you enough to find out where you’re going, who you’ll be with, and when you’ll get home.

9. Choose a woman based on her mind, personality, and values, not her looks.

10. I’ll always love you no matter what you do.

Daughter Veronica with Rick and me at her college graduation

My husband, Rick, has a special relationship with our daughter, Veronica. When she was young, he would take her on dates to show her how a man should treat her. Every girl and woman needs to hear these 10 things coming from the lips of her father by the time she becomes an adult.

2. You deserve a man who will treat you like a princess.

Veronica and her dad dancing at her wedding

3. If any man hurts you, they’ll have to deal with me.

4. I love you enough to find out where you’re going, who you’ll be with, and when you’ll get home.

6. You can be anything you want to be.

8. I’m amazed at how smart and talented you are.

10. I’ll always love you no matter what you do.

Father’s Day will be here soon. Many great classic TV shows have featured fathers. Here are 10 of my favorites.

This fun half hour western centers on widower, Lucas, who has a reputation with a rifle. Luke and his son, Mark, are trying to build a new life on their ranch.

A minister and his wife raise seven children while trying to keep their sense of humor.

This is a remake of a tear-jerker movie with Glenn Ford. Eddie works hard to try to find a wife for his widowed father.

Even though I’m not big on bungling fathers, this is one of the funniest shows I’ve ever watched. 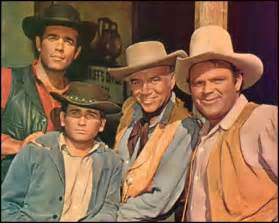 In one of the best westerns ever made, Ben and his three sons build a ranch in the Old West.

This is a tear-jerker that is rarely even seen on reruns. A teenager, and a twin boy and girl lose their mother and father. In their grief, they are separated and passed from relative to relative until they are all dropped off at Uncle Bill’s New York high rise condominium. Bill is a playboy and a bachelor with a butler and a string of girlfriends, but these orphans touch his heart and change his life.

This show is about a community more than a family, but the relationship between widower Andy and son Opie is an important dynamic to it.

This is a show about a widowed father raising his three sons. It’s funny, heartwarming, and will sometimes bring a tear to your eyes. I especially like the later episodes with Willian Demarest, Barry Livingstone, and Tina Cole.

1. Leave It to Beaver

This show is my all time favorite when it comes to shows about fathers. On the surface, it looks like a typical 1950s family show, but it has so many nuances like the fact that Ward sometimes struggles to be a good father, and June doesn’t always agree with Ward about raising children.

So do you have a favorite TV show featuring fathers?