The 1940s is one of my favorite eras to write about. My new novel, Alice’s Notions, is set in 1946, and I loved inserting pop culture and movies into the story. Some of the best movies ever made were made in the 1940s. It was hard to narrow down my favorites but here they are: my top 10 favorite movies from the 1940s.

In this comedy, Cary Grant plays a French navel officer married to a WAC American officer. He has to qualify as a “war bride” to get permission to sail to America with his new wife.

In my opinion, this is the best John Wayne western ever made. Three outlaws rob a bank, but as their trying to escape from the law through a harsh desert, they come upon a woman and her newborn child. They have to decide how much they’re willing to risk to save the baby.

In this movie, Fred MacMurray plays an insurance agent who lets himself be talked into murder by a beautiful woman he’s attracted to. MacMurray and Robinson’s friendship adds the element to this movie that makes it truly great.

This movie which came out on the tail end of the war, puts wartime romance into perspective with the times. Everything has to be sped up as a GI on leave and a girl fall in love. In two days, he will return to the war.

Two sailors on leave have romances and dance and sing through New York City. The dancing is awesome. Gene Kelley dances with Mickey Mouse in the first live scene with animation.

A couple having an affair try to get away with murder when they kill her husband, but then they have to live with the consequences of their actions.

In this post WW2 movie, during a hurricane, gangsters invade a hotel. Bogart has to decide if he wants to get involved. This movie shows the heroism and conflicted emotions of World War 2 vets after the war.

In this Alfred Hitchcock thriller, everyone is excited when Uncle Charlie comes homes, but his niece finds out he might not be the wonderful man everyone thinks he is. This is one of the better early Hitchcock movies. 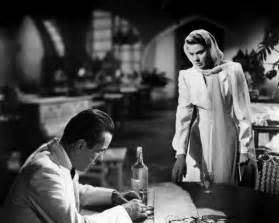 No 1940s movie list would be complete without this classic. As America is forced into the war, this movie comes out about a reluctant American barkeeper in Casablanca who resists getting involved in the resistance movement as the Nazis take over. As he says, “I don’t stick my neck out for nobody.”

As their real life romance is beginning, Bogart and Bacall are electrifying on screen in this WW2 movie about a sailor deciding if he should get involved in the French Resistance. You just can’t take your eyes off of them.

Miracle of 34th Street, It’s a Wonderful Life, and Holiday Affair would definitely be on the list if I were including Christmas movies. The 1940s was a banner decade for classic Christmas movies.

So how about you? Are there any favorites on your list I didn’t include?

In this quaint mountain town, things aren’t always what they seem.

One reviewer said, “AMAZING! What started out as a young war widow returning to her small hometown from New York City to open a fabric shop turned into a very suspense filled, thrill ride! I couldn’t read fast enough! It is a book that once you start, you won’t be able to put it down.
Amazing writing by Tamera Lynn Kraft! I can’t wait to read what she writes next!”